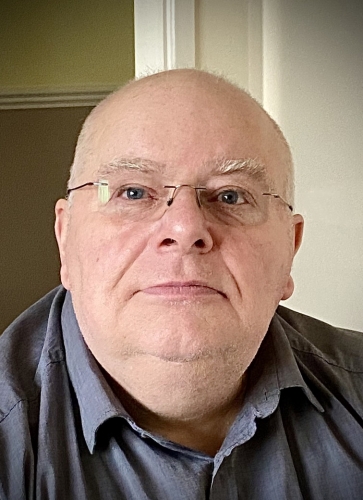 Former Royal Marine who married Exmouth girl, Penny in 1968. After leaving the Corps in 1972, eventually joined the police in my home town of Leicester.

Following a heart attack in 2003, it was suggested that I bought a woodturning lathe to slow and calm down. I'd never had any interest in woodwork or turning before then, but I took to it.

I ended up with a Vicmarc VL175 lathe which I loved but sold in 2018 in anticipation of moving to a smaller house down here. I replaced it with a Jet 1221VS but I missed turning bigger things and the Jet was only used for making about 50 pens. Now we've settled, I've bought the bigger Axminster.

I'm lucky that Penny is also 'into wood'; her main interests being in Scrollsaw intarsia and pyrography.

I've been lucky with my woodturning. My first lesson was with John Berkeley - who fortunately wanted a website building, so we exchanged skills. John was working with Hamlet at the time and was instrumental on the introduction of the Eli Avisera tools. I met Eli at John's and spent some time with him and learning some of his methods. Eli has been an inspiration particularly with his methods of convex sharpening and double bevels - no catches with his skew and an excellent finish straight from the tools has always appealed. I just wish I was as good as him.

I ended up making lots of pens and made a (now long-outdated) dvd on the subject. For a few years, I wrote articles for Woodturning magazine and was lucky enough to test tools for them and some manufacturers directly.

I love using exotics but tend to use English hardwoods more than anything as in Leicester, I was able to get it at a very special price as the sawmill (English-hardwoods.com) needed a website.

I was secretary of the Tudor Rose Woodturners in Daventry for a number of years, but left that to concentrate on making bullet pens with Regimental crests on. This was ok for 3 years but the MOD take so much in royalties, it just wasn't viable. That was just one of my many, fantastic money making ideas that have cost a fortune, but have really come to nothing.

It has always been our intention to move back to Devon and have ended up in Starcross.

One of my favourite turners is your life member Nick Agar. I told him we were moving down here and he moved to the USA! (I don't think that was anything to do with us though).

I've never demonstrated as I'm not comfortable talking to 'audiences' although I am more than happy to help anyone if I can. I'm still learning and still make lots of mistakes.

Paul is one of our Advanced members.