Encouraging, developing and promoting the art and science of woodturning

February 20th dawned DRY in Woodbury and was DRY at the end of the Club Night. Not many days recently you could say that about!

The evening itself was really well supported with in excess of 70 members in attendance.

Peter Johnson ably demonstrated ways in which he achieves the excellent finishes on his pieces and held the interest of a large audience throughout. 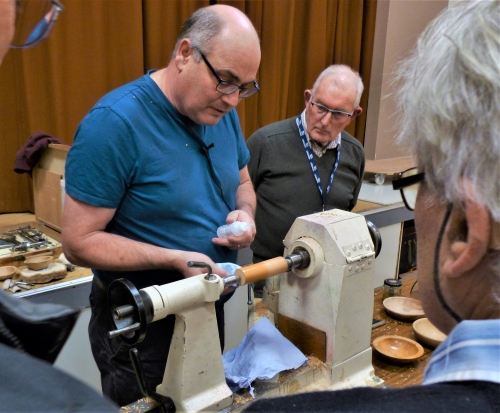 Tony Bennett and John Haxell demystified the dreaded skew chisel and loads of people got to experience success with it. Apparently it's all about rubbing your bevel. 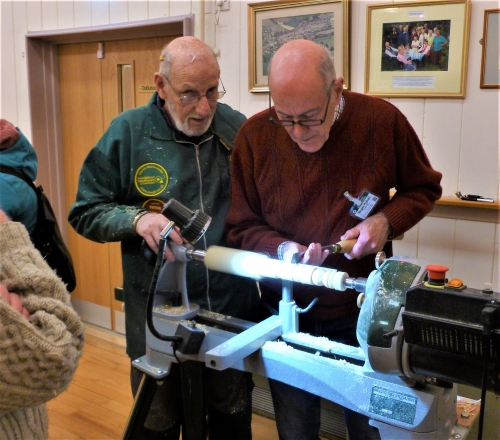 John was very generously and ably assisted by relative newcomer to our club, Paul Loseby. It is clear that he is not only a superb turner but also an accomplished coach and that people appreciated this combination of skills. 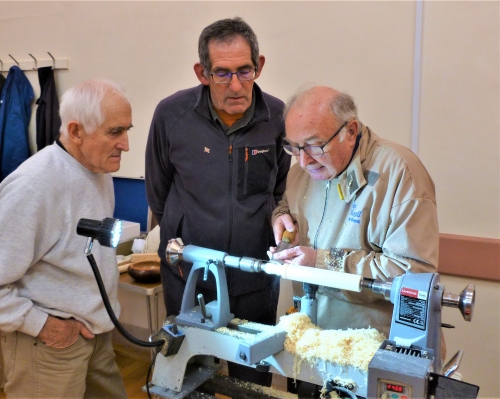 John Lacey was seen up to his ears in DVDs and books on turning and seemed to be doing a brisk trade. Keith Wilson was as abrasive as ever, displaying recently added products on his table. Michael Merrett  (you may know him as 'Mike') managed the raffle superbly, as usual, and I only managed to win back one of the items I donated this time. Thank you Mike.

At this point it is worth saying that his raffling skills are only of benefit to the club if members donate the prizes. So why not try to bring something for the next raffle on 19th March. It will be gratefully received, especially if, where relevant, it is unused and 'in date'.

So to the competition - 'Open' this time. In the absence of Competitions Officer, Stewart Leach, Aubrey Dean and Graham Drury handled the most popular contest of the year with aplomb, which was later eaten with custard. The logging of items was immeasurably aided by the use of a mobile phone to scan entrants' membership cards. So modern technology IS useful after all!

In all, a total of 26 entries was recorded, half of them in the Advanced category. Intermediates raised 8 items and Beginners 5 and the standard throughout was impressively high. The winners, runners-up and third placers were presented with their certificates by our Chairman, Stephen Long, and pictures of all may be seen in the night's gallery whose  photos have been taken and uploaded by Graham Drury, for which many thanks.

Also in the Gallery are pictures of the various other activities in the Hall on the night.

The next competition is for a 'Bud Vase' at the Club Night on April 16th so get designing, drilling, hollowing, decorating and finishing in readiness.